Well, the spring flowers are glorious as always, and I have not had time to get out and get some new photos.  So I am re-posting last year's blog about our beautiful woods and wildflowers.  We live in a very special place!

The 146 acres of woods and trails that are shared by the Elderberry and Potluck Farm communities are exceptionally beautiful in the spring.  This week the wild azaleas are in full bloom and they are stunning.  But they are not alone in their beauty!  We start the spring perfusion of wild flowers with a blanket of trout lilies throughout the woods in March, followed soon by the daring little spring beauties and the tiny yellow blooms of the spice bush.  An early and more rare flower is the adorable white bloodroot, which grows in a secluded area among some deep purple trillium.  These flowers have now passed the beauty-baton to the bluets, dogwoods, redbuds, lousewort (wood-betony), forest chickweed, toothwort, cinquefoil and violets.  As we move deeper into spring we will be rewarded with atamasco lilies, wild iris, may apple, cardinal flowers, mountain laurel and the so-beautiful lady slipper orchids.  It is no wonder that 27 years ago, the botanists who were initially looking to buy land together to build a community were smitten with this property. 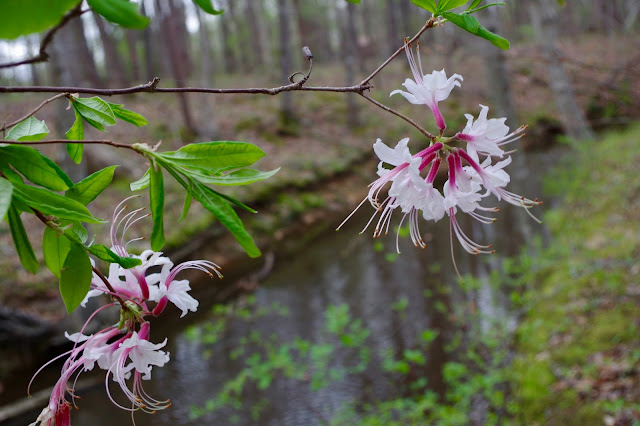 The azaleas often grow on the edges of the streams and reach out across the water to capture the sunlight. 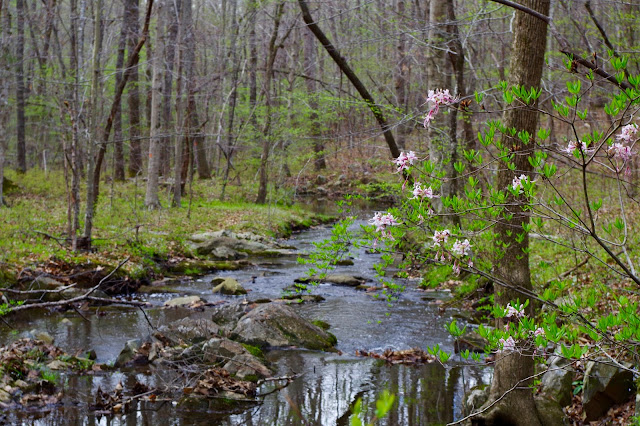 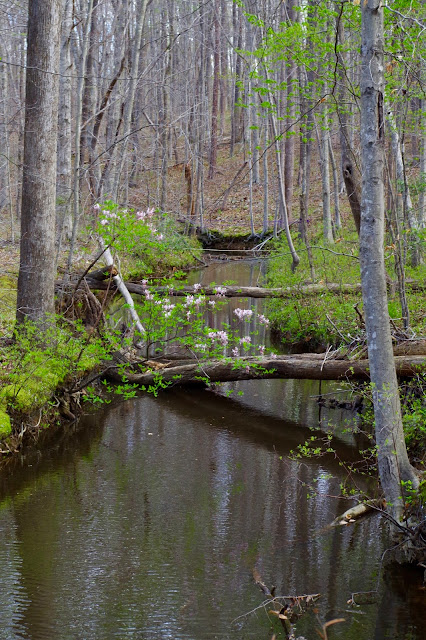 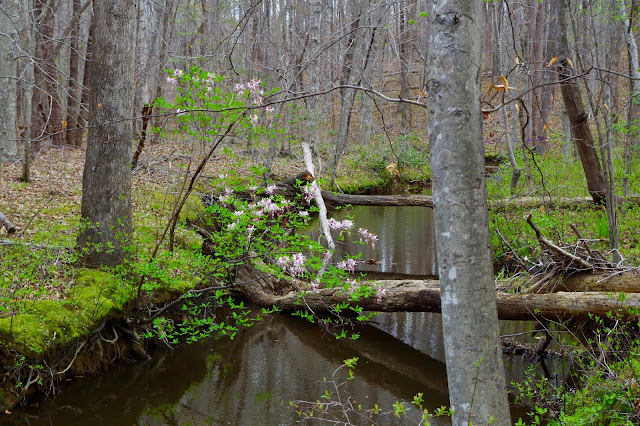 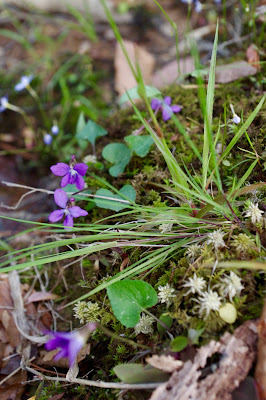 A little hard to see here, but tiny bluets blanket the edges of the streams 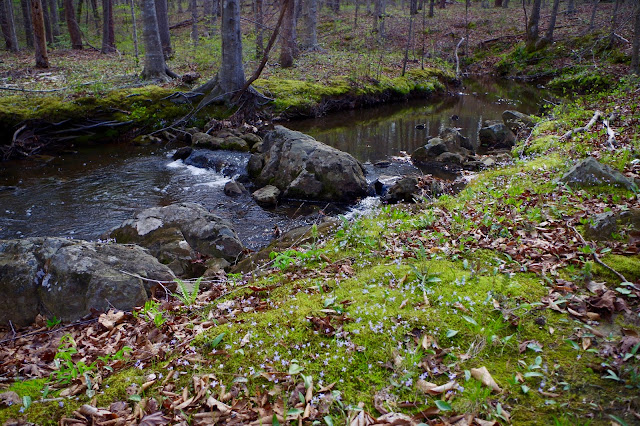 I just saw the cinquefoil for the first time today 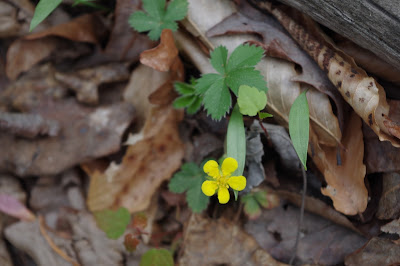 The lousewort - or a prettier name that Marj just told me - wood-betony.  Marj knows all the scientific names of the flowers also - she is the person to go hiking with in the spring! 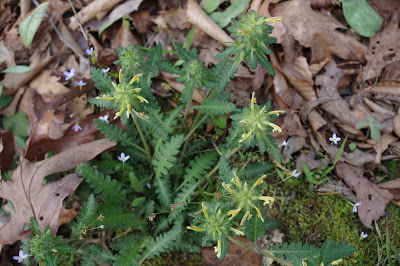 Posted by Mary Bennett at 1:32 PM No comments:

A few years ago, Dick decided he wanted to host a party, and have it at the Love Shack.  The Love Shack is a sweet little one-room cabin with loft that was built in the early days of Potluck Farm.  It was used as a weekend retreat, kid's playground and party place.  It is now rarely used, but the site in the woods is so lovely that Dick decided an annual party there was called for.  For this 3rd annual weenie roast, Dick raked up the site and brought in wood for the fire, and Leslie made a new door for the outhouse (with a lace screen - so elegant!).  Folks from Elderberry and Potluck Farm and some of our friends and neighbors got together to roast dogs and s'mores, play corn hole, and enjoy the perfect spring weather.

Joan is beautiful and her food is beautiful!  Asparagus is fancy fare for a weenie roast! 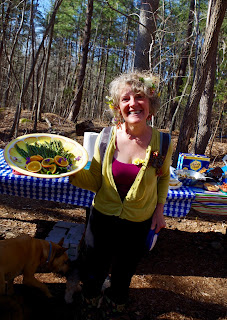 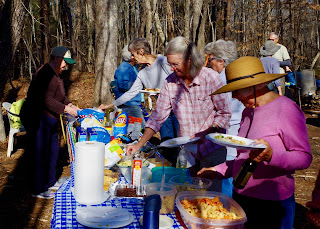 Dick, Joyce, Cheryl, Anne, Richard, Jack, Kelly and Loretta making their dogs.  Dick's T-shirt says "It's all fun and games until somebody loses a weenie"  And truly quite a few were lost in the fire (and a few marshmallows bit the dust as well) 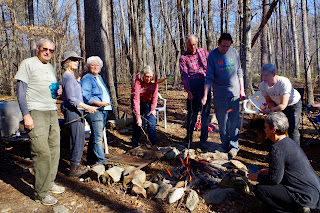 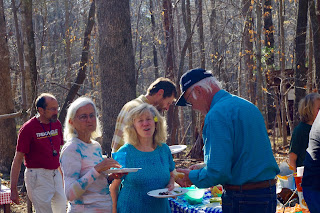 Rosemaire, Cathy, Cynthia and Marj - and the little Love Shack in the background 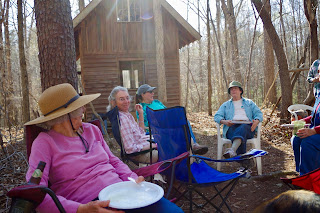 Miles' first attempt at roasting marshmallows - he did great!  Meredith and Karolyn are also roasting.  Dick carved the sticks. 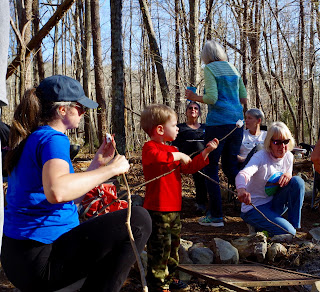 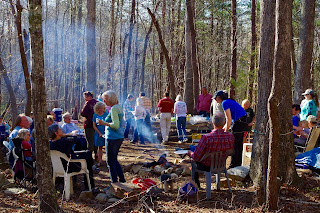 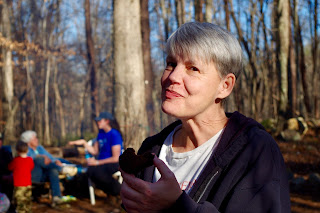 Cynthia and Glaeshia - such a pair! 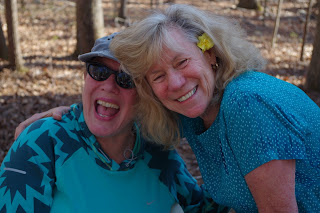 Mike and Dave (caught you on camera Dave!!) 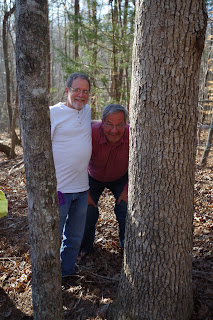 Posted by Mary Bennett at 10:03 AM No comments: