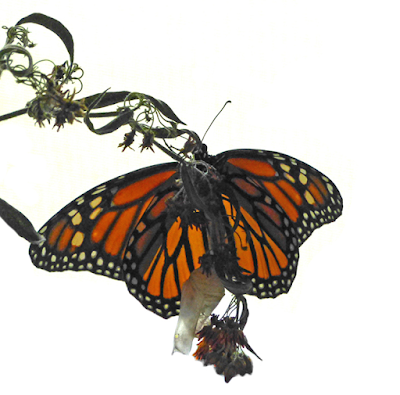 On the bright morning of June 28, 2020 Linda counted six monarch caterpillars on the milkweed bush in her front yard! Delighted, she immediately showed several other community members this exciting discovery.

However, checking back only an hour later, just three caterpillars remained. Meanwhile in the large oak tree overlooking her front yard, a mockingbird chirped away appearing to brag about its tasty breakfast.

Clearly concerned about the safety of the three caterpillars, she enlisted Jacquie, her next door neighbor for assistance. Fortunately, Jacquie had much experience raising and releasing Monarch butterflies.

The milkweed bush in Linda’s front yard is the Monarch butterfly’s favorite food. 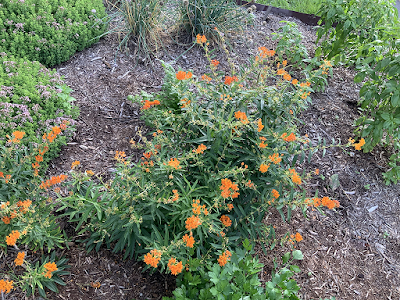 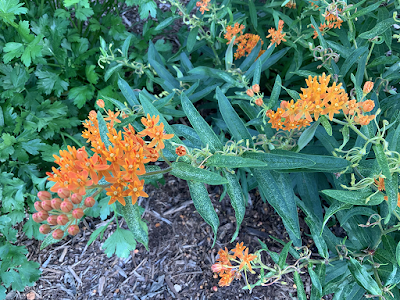 A butterfly raising tent is a large mesh tent with a zippered opening on the front for access to the caterpillars.

Once safely inside, a fresh bouquet of milkweed was provided for the guests to munch on. 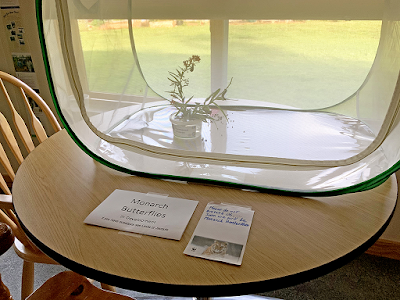 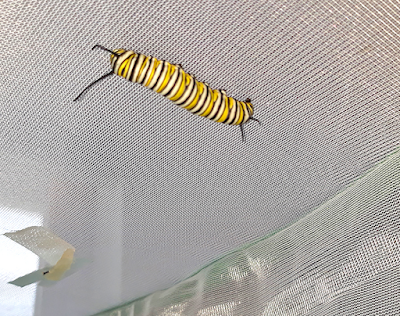 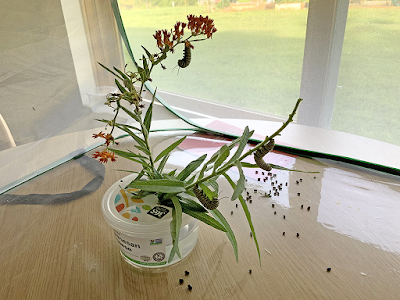 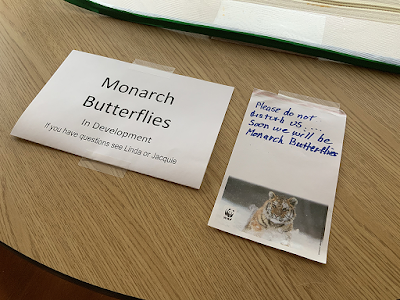 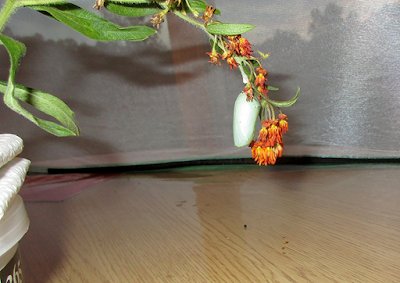 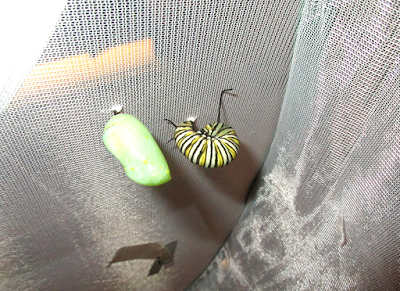 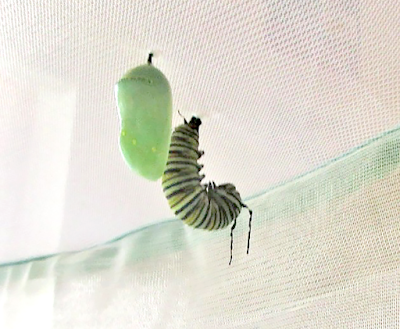 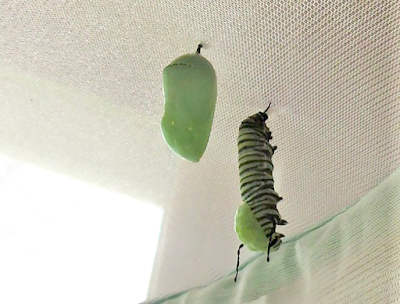 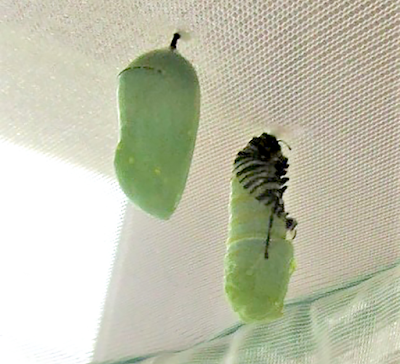 For eight days, nearly everyone at Elderberry checked in on the Monarchs’ progress. Finally, the butterflies emerged! An announcement quickly went out via e-mail. After nine hours, their wings had expanded and dried, ready for release. 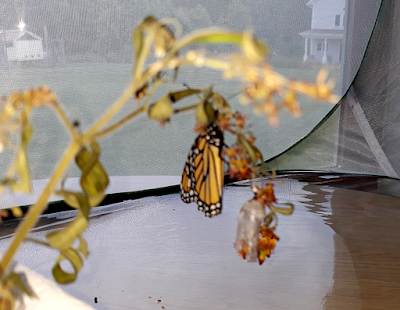 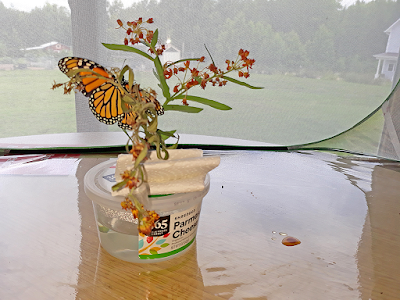 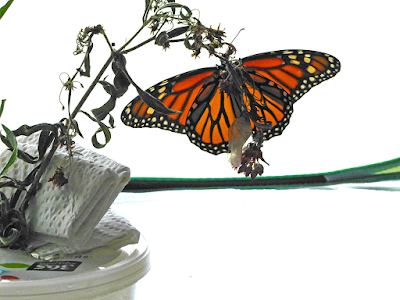 There was much discussion about which butterfly bush location provided the best opportunity for a safe release. The final decision was the location down near the community gardens, farthest away from community bird feeders!

When the release time came, Jacquie encouraged each butterfly to climb onto her finger. She gently carried each one in her cupped hands and we all headed across the lawn to our butterfly bush. On Wednesday, July 8, the last of the four butterflies were released back into the wild. 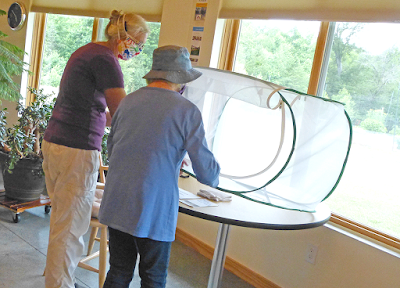 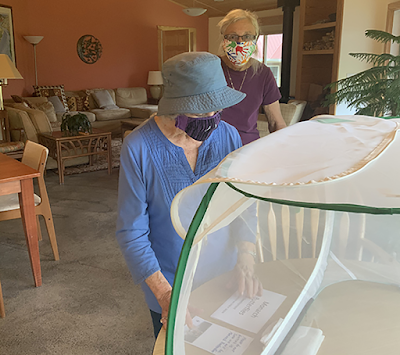 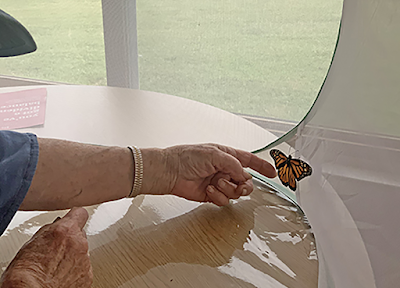 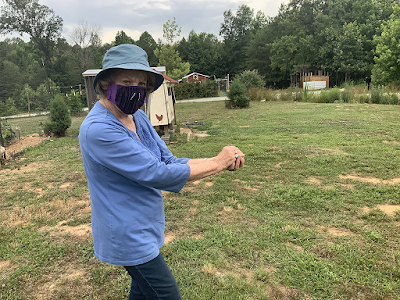 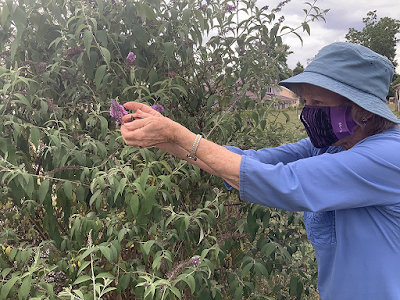 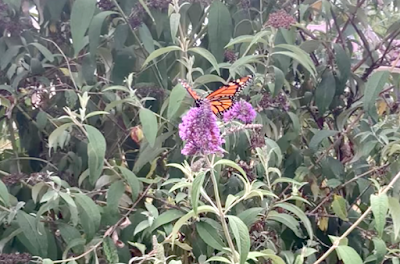 After gently placing her on a flower, there only was time for a quick photo before she flew away.

Jacquie was delighted to be able to see her beloved monarchs again. Not only did she raise them in a shoe box as a child in Hawaii, Jacquie worked with an entomologist at Washington State University raising and tagging Monarchs for research where they winter in California.

Last year two Monarch activists in Mexico were killed trying to preserve Monarch butterfly habitat. Members of a cartel who are involved in the new and lucrative avocado growing business have been implicated. We mention this to illustrate just how endangered these beautiful butterflies really are. 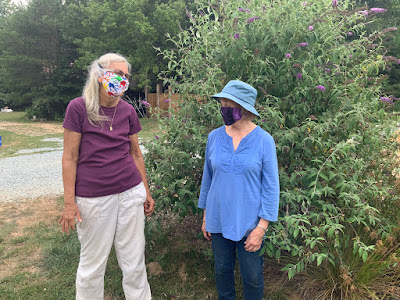 For this reason, Linda and Jacquie are hoping to encourage everyone to include some milkweed plants in their garden every year to help grow the population.

For more information, check out www.monarchwatch.org
Posted by Joyce from Elderberry at 5:35 PM No comments:

Nancy Bennett was born on the 4th of July - 86 years ago!!  We wanted to have an Independence Day birthday party, but had to figure out how to do that in a Covid world - quite a challenge.  We managed to have a wonderful time while also taking precautions. 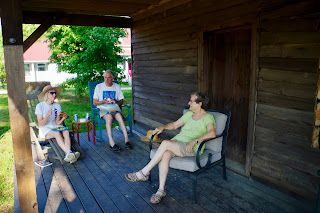 Posted by Mary Bennett at 8:48 PM No comments: