Gorgeous Weather for Our Workday

We had a workday on Saturday and it was such a lovely day to be outdoors.  In the morning, a crew worked to clean up the area east of our front entry.  It looks so much better!  They also moved a lot of rocks (yes, we have a LOT of rocks) and several people worked on smaller tasks as well.  We had visitors from Boston - Jim and Peggy - who are long-time friends of our members Richard & Karolyn.  Jim and Peggy are starting an urban co-housing community in Boston, so we were comparing notes about development challenges and meeting process.  So much to learn from one another!

We had a good business meeting (ended 30 minutes early - that NEVER happens!) and a great potluck.  Hope this lovely fall weather continues!

Watch this space..... in a few short weeks we will be launching our new website!!  And a couple of other events for those interested....


Lunch together at our workday 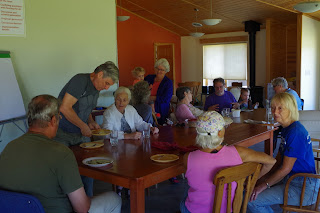 Mike and Cheryl did a little babysitting for Mary's grandkids 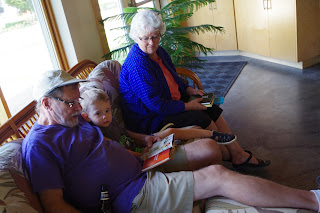 A bit hard to see here, but this front lawn area used to be a MESS of erosion control pit and debris. 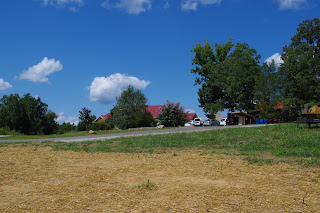 Richard and Jim - part of the rock-moving crew! 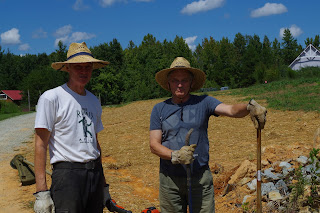 The final quad.  Two of these homes are now for sale. 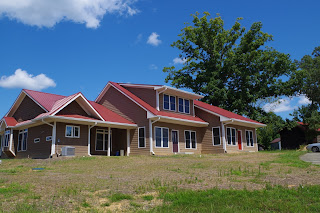 Vonda heading to help the rock movers - the tractor is a lot easier that wheelbarrows for the biggest rocks! 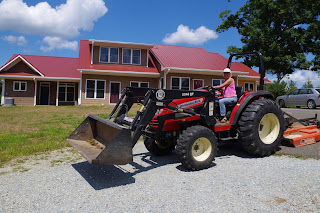 At the potluck dinner following our monthly business meeting 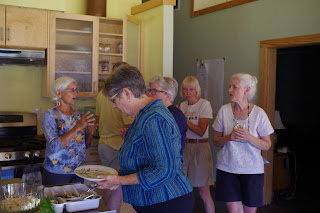 Cheryl and Kelly enjoying a lovely day on Cheryl's porch 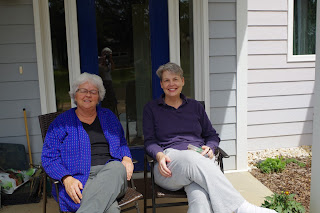 Posted by Mary Bennett at 9:49 PM No comments:

Well, it's been almost 2 months since my last blog - not because there is nothing happening at Elderberry, but because I took a 5 week vacation!  It was so great to come home to see Elderberry becoming even more beautiful!  While I was away the new pedway was put in and the erosion control pits (huge pits that were required during construction) were filled in and smoothed over.  Wow - what a difference that makes!

We also got the occupancy permits on the final 4 homes this month.  Members have moved into two of those homes - Mike Moore moved into his tiny house (350ft2) and David and Diana DenBeste moved from Nebraska into their new home.  David and Mike have both jumped in by joining our new Work Coordinating Committee, and Diana is a massage therapist who LOVES to give massages at no cost as her contribution to the community.  Awesome on all counts! The last two homes are now for sale and we welcome visitors!

We also had some sad news while I was away.  One of our members, Leslie, was diagnosed with stage IV lung cancer.  This will be the first big challenge for us all in how we can love and support our members during the most difficult stage of life.  Right now, Leslie is doing great and was digging out a huge stone with a mattock at last Sunday's workday!

Over the past few weeks, Dick and David worked together to build three new picnic tables to put near the pond at Potluck Farm.  This is a great example of our two communities working together.  Potluck Farm is a 27-year-old community adjacent to Elderberry (5 members of Potluck Farm have moved or are planning to move to Elderberry to downsize).  The two communities share the common house (at Elderberry), and trails, pond and gazebo (at Potluck Farm).  For the last 20 years there have been three sturdy picnic tables at the pond.  But lately they haven't been so sturdy.  So Dick volunteered to make new tables, Potluck Farm put up the money, and Dick and David built them.  Today they moved the tables over the to the pond.  Time to plan some al fresco dining!

David, Dick (and Riley) working on one of the tables 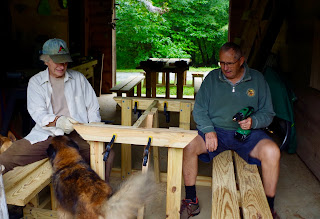 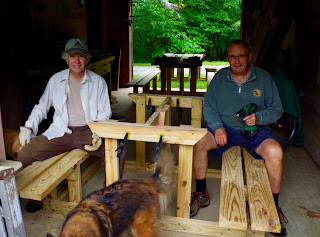 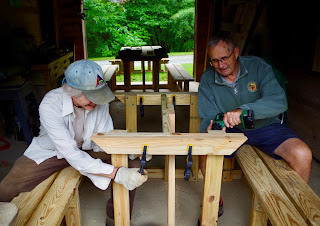 Dick taking a break to give one of the donkeys a treat - they are very curious about the project! 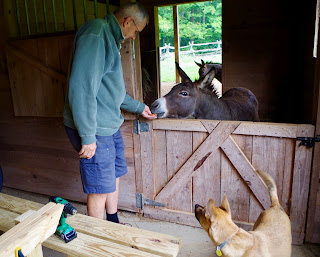 David and Dick moving the tables to the pond 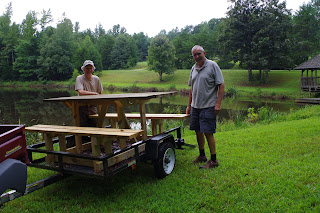 The picnic tables on the dam left of the gazebo - ready for use! 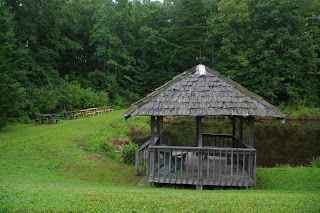 Posted by Mary Bennett at 9:13 PM No comments: