We purchased the Elderberry property about 10 years ago.  There were about a dozen old structures on this farm property when we bought it, some of which we have been able to save as we developed the property.  Among these is the original, hand-hewn log house that was on this farm.  It is tiny - just one log room, one adjacent room and an upstairs.  We have not yet decided how to use the structure, but we have decided to preserve it.  Someday it might become a guest house, or a house for a Woofer (World Wide Organic Farming internship program) or an Airbnb, or just a cool storage building.  Last year we added a new floor and new roof.  This coming year we will begin working on protecting the logs.  On one side of the house, the logs are currently exposed, but on the rest of the house, they are covered with old wood siding, which has protected the logs for nearly 100 years (we are exploring the home's history with help from our county's Registrar of Deeds).  Both the front and back of the house originally had porches.  The south porch was already nearly collapsed when we bought the property.  The north porch was in pretty bad shape, but it served a purpose  - for a long time, as we were clearing the land and building the common house, that porch was a protected area where we had lunches, stored tools, and gathered in the rain.  Today...... we tore it down.

David and Dick started the project by removing the old, rusty tin from the top.  Richard joined in and the three of them dismantled the supports under the rafters. We had a truly beautiful day for this job - pretty darned warm for December! 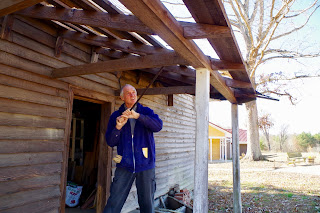 Dick and Richard had to figure out which boards to pry off (and which to not take off, since they are standing under it! 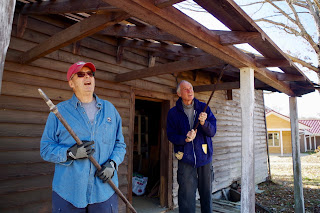 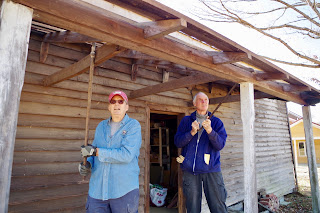 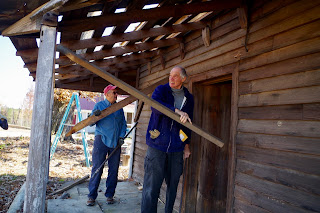 David took off some of the structure on the side of the roof to free up the rafters. 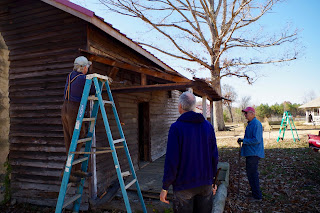 They used Zeke (a Kawasaki Mule that had been named) to pull out all of the posts, but the structure was still surprisingly stable. 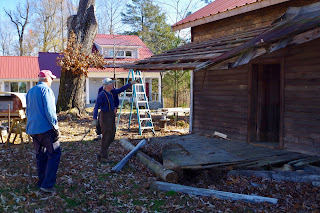 They hooked the freed-up corner to Zeke with a chain, and Zeke pulled...... 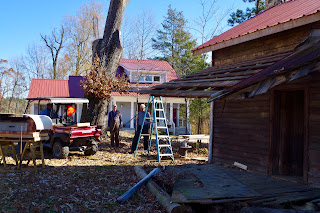 And down it came! 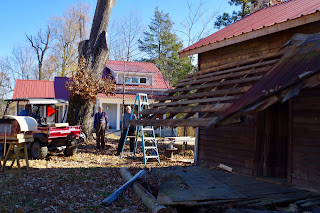 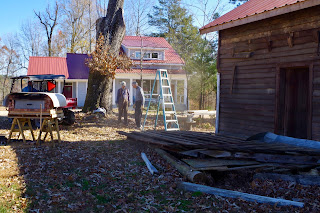 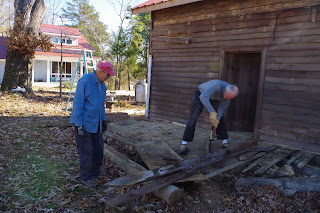 After the dust settled, the guys went to work tearing apart the boards.  These old boards were strong, heavy, rough-cut timbers so we pulled nails to save the boards for another project - maybe shoring up another little log structure we have! 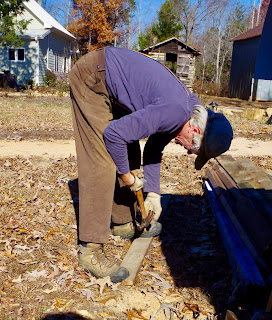 Mike joined in and worked to dismantle the floor 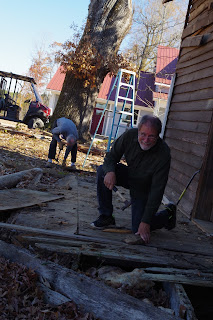 David pulled lots of nails!  The job wasn't completely finished today, but not much more effort will be needed on our next workday.
Posted by Mary Bennett at 8:46 PM No comments: