On the Saturday before Halloween, the Elderberry and Potluck Farm communities team up to host a huge Halloween bash.  This year the weather was absolutely perfect - enough clouds to keep the temperature balmy, but few enough that we could see the stars and watch the moon slide across the night sky throughout the evening.  We always invite a lot of friends to this party, and this year we had a ton of kids, who had a blast pressing apple cider, carving pumpkins, going on the hay rides, playing corn hole and generally being wild and crazy.  The adults had fun too.... eating veggie chili, potluck yummies and an awesome bbq pig that Kenny cooked up on his new cooker.  And of course we had our favorite band, the Gravy Boys, who have been playing at this party for 11 years, and who lead us in dance and song.

The party really gets rolling after dark, but I didn't take any after-dark photos!

The Gravy Boys setting up 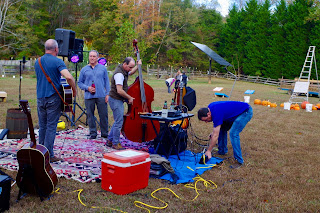 Jim getting the cider press going.  Older kids love this as much as the younger ones. 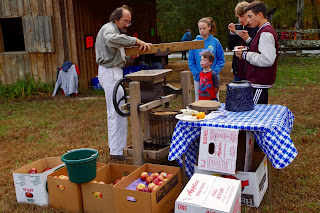 Food tables!!  On the right side of the table is one of our newest associate members, Mindy Neal 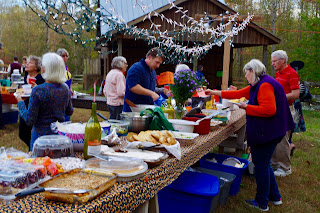 We make the veggie chili in a huge 6 gallon cast iron pot, and by the end of the night is GONE.  We had lots of helpers this year a couple of hours before the party.... David, Diana, Karolyn and Jack all helped chop onions, peppers and garlic ,and open lots of cans of beans! 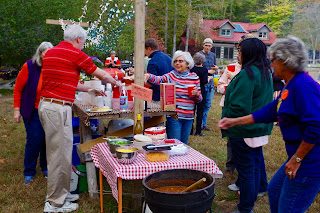 We start a big bonfire for warmth (not needed this year), S'more making and heating up the cider.  And just because people love hanging around bon fires! 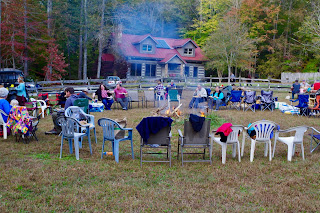 David, Diana and Karolyn chowing down (Kenny's new red cooker in the background) 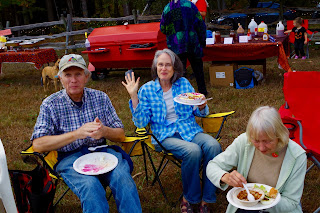 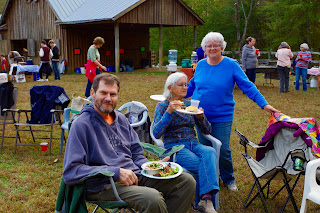 Kids getting started on pumpkin carving.  Every year each pumpkin gets a ribbon for "best something" (best smile, scariest, most toothy.....) 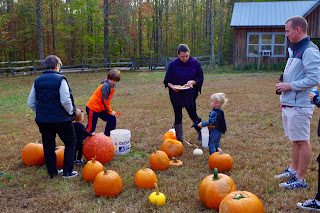 Cecil (the wizard) helping himself to some tasty bbq with Kenny, the bbq master, in the background.  Kenny also made 3 awesome bbq sauces this year. 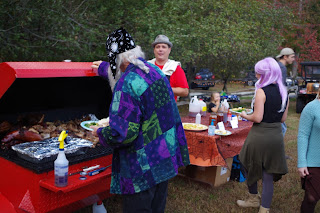